A book which details the life and achievements of a Castleblayney native known locally as The Runner McGough has gone on sale in shops throughout Monaghan and Cavan.

The book can be ordered online with the PayPal button below, one is in Euro and the other is GB Sterling.

Delivery to Ireland
The Runner McGough Book
– €15 plus shipping. 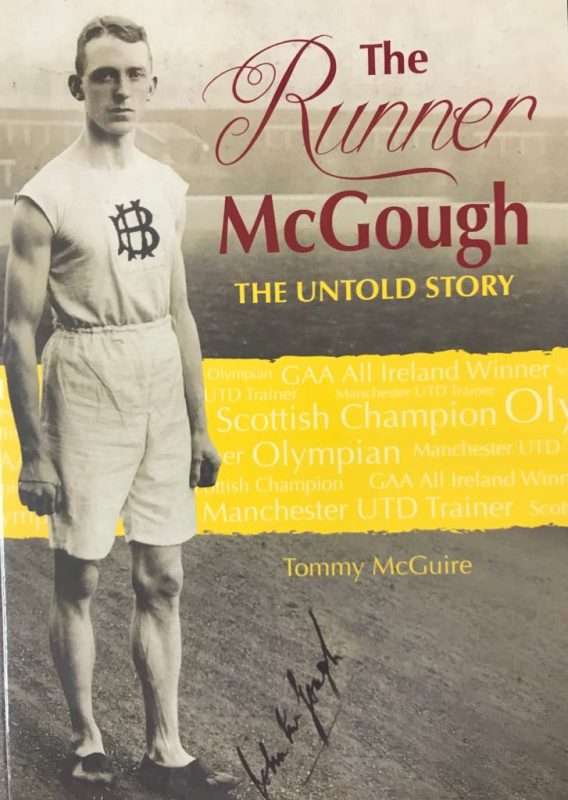 John  McGough was one of the world’s greatest athletes of the early 1900’s.

John McGough was born on the 20th January 1881 to Thomas and Bridget McGough.  His mother Bridget was daughter of Francis and Ellen Markey, Tattygar and his father was son of Francis and Nancy (nee Mooney) McGough, Lisceenan, Castleblayney.

At a very early age John‘s parents decided to emigrate to Glasgow in Scotland to begin a new life. After his schooling John found work as a postman and developed a keen interest in athletics.  He joined the local Bellahouston Harriers Athletics Club and soon became the dominant force in Scottish Miling in the first decade of the twentieth century.

At one time he held every Scottish record from 1000 yards to 4 miles.  He won a total of 12 Scottish AAA titles.  Most noteworthy of these was his remarkable achievement in winning the Scottish title in the Mile for six years in succession 1902-’07.  John also created a piece of Scottish history in 1903 when he won the Scottish Championship races at 4 miles, 1 mile and 880 yards, in the Ibrox Stadium home of Glasgow Rangers.

In 1906 John was chosen as one of the athletes to represent Great Britain at the Intercalated Olympic Games in Athens.  McGough participated in the 800 meters, 1,500 meters and the 5 mile events.  It was in the 1,500 meters race however where McGough excelled and in an enthralling sprint for the line finished in second place to take an Olympic Silver behind reigning Olympic Champion James Lightbody of the USA.

McGough was again selected to compete for Great Britain in the 1,500 meters in the 1908 Olympic Games held in London but was carrying a bad ankle injury and failed to qualify for the final.

John McGough retired from Athletics in 1910.  In 1914 he was approached by Rob Davis the former Celtic Trainer to join him as an assistant trainer at Manchester United.  Rob Davis and John McGough were employed by Manchester United until April 1915, until football was suspended due to the 1st World War.  John McGough now unemployed returned to Castleblayney where he took up residence in Annaglaive.  His interests then moved to GAA and he became one of the founders of the Blackhill Gaelic Football Club.  It is reported that John’s work as postman in the Blackhill area of Glasgow and links that other club founders had with that area in Glasgow were the factors in naming the Club by that name.

While back home John turned his trade to helping injured football players and soon became a reputable masseuse for many local football teams and other injured individuals.  His talents were later recognised by the Management of Cavan GAA and in 1947 he travelled to New York as part of the background team of the famous Cavan team who won the first and ever All Ireland to be played outside the Country.

John married Minnie Meegan in 1931 who was a school teacher at Laggan National School, but sadly she past away just 7 years later.